The Misperception of Creative Genius

Antiguan artist and writer Frank Walter (1926–2009) produced paintings that dealt with race, class and social identity, as well as abstract explorations of nuclear energy, portraits both real and imagined (including Hitler playing cricket, and Prince Charles and Princess Diana as Adam and Eve) and miniature landscapes of Scotland. Coincided with Antigua and Barbuda's inaugural National Pavilion at Venice Biennale 2017 is the publication of Dr. Barbara Paca's book, Frank Walter, The Last Universal Man, 1926-2009. Dr. Paca, an art historian who also serves as a cultural envoy for Antigua and Barbuda, invited Dr. Caitlin Hoffman to contribute the following essay to her book. 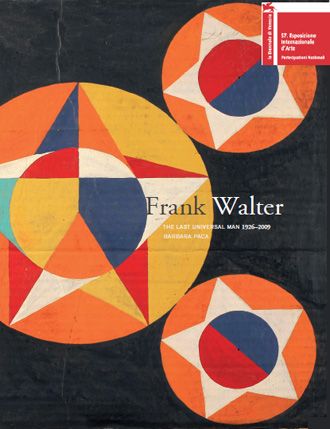 "The celebration of Frank Walter’s life, and the material representations of his inner world, is a momentous occasion. Given his struggle with what was often labeled as schizophrenia, an exploration of his actual words, the true content and origin of his thoughts, the composition of his physical creations, and their relationship to his inspiration and ultimate refuge in his homeland of Antigua is essential to shed light on the common misperception of creative genius.

There is a strong history of 'creative genius' associated with perceived mental illness — a confounding interpretation, as most unique and substantial contributions are associated with an element of uncovering and understanding things and worlds previously unexplored and newly discovered. One would expect these types of revelations, the works of creative masterminds, to emanate from a dimension of reality that is not commonly perceived. As was well articulated by Mr. Walter, 'The world is not visually conscious to the normal mind, but abnormality is not necessarily always undesirable.'

While psychiatrists and neuroscientists ascribe the behavior and thought processes demonstrated by Mr. Walter to an imbalance of neurotransmitters and receptors, the resultant capacity for exploration of other dimensions of the physical world, and one’s own mind, confers astounding potential for new creation, new thought, new perspective.  The works of Vincent Van Gogh, Paul Gosch, Adolf Wolfe, Heinrich Muller, Ralph Blakelock, Peter Green, Syd Barrett, and Charles Bolden all created art forms that emanated from mentally 'altered' states labeled as psychotic, schizophrenic. All of their work presented new angles, new mediums, new use of content, light, shadow, or sound to physically represent their inner world.

The concept of Art Brut, crafted by Jean Dubuffet and literally translated as raw art, describes a form of art 'without connections or influences from established art styles or culture'. Dubuffet indicated that as a result, 'schizophrenic art; appeared more intellectual and emotionally detached than depressive or 'bipolar art', which centers more on feelings. Walter’s work and words highlight a similar distinction. He describes his purpose as one of study, his endeavors as carrying clear purpose. The intent of his seclusion was not inward retreat, but unfettered pursuit of his art and achievement of a more grand and significant existence. 'I am a student. I am studying my way,' he wrote. 'Let us not mistake the student seeking solitude, or recluse, for the sake of knowledge, for a melancholy person who evolves nothing.'

Far from the presumed lack of self-awareness we ascribe to persons who experience alternate realities, Walter demonstrated a clear understanding of the misconceptions that accompany him, and those who experience and conceive of the world differently. 'I (Frank Walter) have been prepared to prove that even insanity and such types as schizophrenia, is not what we think that it is, although of necessity ... we are confronted with a problem which remains phenomenon for the time being.' Different from the mainstream interpretations of schizophrenic art as chaotic, distorted, and tormented, Walter describes his experience of his inner world as one of supreme consciousness, one that we mere mortals cannot attain. His words lead one to wonder if our more easily interpretable and accessible forms of art and media are the result of layers of filters placed over a more genuine and raw representation. Walter’s work, and those of other 'schizophrenic' artists, proposes that a level of disinhibition and honest introspection is necessary for true consciousness.

Despite his rationality within his constructions of grandeur and purpose, he faced clinical scrutiny, confinement, racial exclusion, and lack of recognition during his time in the UK and Europe. It was his salvation that these pressures led him home. However grand his vision of himself and his purpose in this world, his true universalism and core philosophies found ultimate resonance in the Antiguan countryside, immersed in a wild, fragile beauty that mirrored his own. Antigua provided asylum for such a soul, a larger canvas on which to 'build his sanctuary', to spread his ideas and sufferings, to create his triumphs, and to make peace. Compared to others who struggled with the same condition in different environments, sentenced to confinement, to stifling their creativity, to creating from within institutions, Walter’s art, ruminations, and philosophies remained free.

Although not recognized on the scale he dreamed, the lack of dedication to conformity, the tolerance, and the generosity of the people of Antigua allowed Frank this freedom, able to pursue his conceptualizations, to create his universe. Walter did not spend his life in an institution, drawing on rebellion against sterility and conformity, but instead was offered inspiration through the island’s beauty, rock-strewn shores, and stunning sea coasts for asylum, healing, and convalescence.

In my budding exploration and relationship with the island of Antigua and its people, the possibilities it possesses for healing, utilization of local sustainable resources, and global collaboration are unique. The connection Walter found with his homeland as inspiration and refuge represents the potential of this nation to serve as an international example of inclusion, of discovering ways to bring those who exist on the periphery to the center of the effort to strengthen the core of a nation’s health, its sustainability, and quality of life. One such example is the governor general's initiative to utilize the island's unique natural resources for healing and inclusion through therapeutic gardening. It is this foundation, such that inspired Mr. Walter, that provides the opportunity for the nation’s vision to be shared, to become a cornerstone of international collaboration.

Frank Walter was a monumental individual whose place in the history and future of Antigua has been established by Dr. Paca. Mr. Walter embodied the foundation of the nation as an embassy of tolerance, strength, and resilience. The detailed and powerfully personal exposure Dr. Paca affords us to Walter's universe allows for understanding and appreciation of the unique lens afforded us by individuals with expanded and unfiltered vision, and the courage to physically construct and present this vision, such as Walter, who inspire through their creation. An important step toward the unraveling of certain misconceptions of the creative genius. While the lives of individuals grappling with alternate realities often indicate an element of associated torment inflicted by the reaches of their minds’ eye, while it is tempting to see only the 'otherness' of their existence, it is clear through Dr. Paca's discovery of Mr. Walter's words and inner universe that there is also much indescribable beauty and heightened consciousness intertwined. As Mr. Walter aptly stated in his manifesto, 'My life was closest to what could be deemed the perfect human life.'"