The results of the 2019 National Residency Match were announced today, and the Department of Neurological Surgery is pleased to announce that Alexandra Giantini Larsen and Andrew Garton will be joining our neurosurgery residency program in June. Both of our new residents have distinguished themselves as future clinician-scientist leaders and impressed us with their skills, academic accomplishments, and maturity. Their backgrounds and accomplishments make clear why we are so excited to have the opportunity to train these two outstanding physicians: 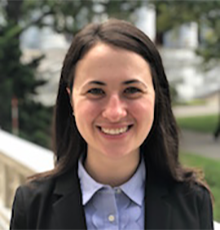 Alexandra Giantini Larsen is a native New Yorker who earned her bachelor’s degree with honors in Molecular and Cellular Biology at Johns Hopkins University. She will graduate in May from Harvard Medical School, where she was vice president of the AANS medical student chapter and co-president of the Harvard Medical School chapter of the Association of Women Surgeons. Alexandra spent a year as a Howard Hughes Medical Institute Medical Research Fellow in the laboratory of Dr. E. Antonio Chiocca, Chairman of Neurosurgery at Brigham and Women's Hospital in Boston, where her research was focused on viral therapies for glioblastoma. She also has spent time as a researcher in the Vascular Biology Program at Boston Children's Hospital with Dr. Edward Smith and in the Brain Tumor Stem Cell Laboratory at Johns Hopkins Hospital with Dr. Alfredo Quinones-Hinojosa. Alexandra was an observer in our own department during her college years, when we recognized her emerging talents, and we are delighted to have her join us for her residency. 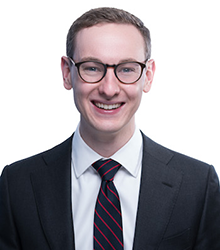 Andrew Garton, originally from Salt Lake City, will graduate in May from Columbia University Vagelos College of Physicians and Surgeons, where he is a member of both the medical student honor society Alpha Omega Alpha and the Gold Humanism Honor Society.  As a medical student, Andrew was a researcher in Dr. Connolly's Cerebrovascular Lab, where he was awarded a NIH/NIA T-35 summer grant for his investigation into biomarkers of functional outcome in intracerebral hemorrhage. He earned his bachelor’s degree with honors in Biopsychology, Cognition, and Neuroscience from the University of Michigan in Ann Arbor, where he was a research assistant in the Psychoneuroendocrinology Affective Laboratory with Nestor Lopez-Duran, PhD, investigating cognitive vulnerabilities to depression, among other projects.  Andrew has served as vice president of the Columbia University AANS Medical Student Chapter, and leads workshops for third-year medical students that aim to improve communication skills for doctors having end-of-life and goals-of-care conversations.

We are delighted to add two such talented young doctors to our team, and we look forward to having them join us this summer.

More about our residency program