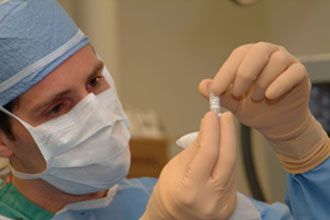 Dr. Michael Kaplitt is an internationally recognized  pioneer in the application of gene therapy to the brain and nervous system. In his research laboratory, Dr. Kaplitt directs research with the goal of better understanding the reasons why brain cells die in neurodegenerative disorders such as Parkinson's disease. Dr. Kaplitt and his research team have identified key pathways that they are using to develop novel gene therapies to improve cell function and even stop cell death in experimental models of Parkinson's disease and Huntington's disease.

As a result of this laboratory research, Dr. Kaplitt and his colleagues conducted the first-ever trial of gene therapy for Parkinson's disease. The trial was based on concepts that had already been proven successful in more traditional surgery, such as the deep brain stimulation performed in Dr. Kaplitt's surgical practice. The surgical procedure for the gene therapy trial was similar to the operation for deep brain stimulation, but instead of inserting an electrode into a target deep in the brain, Dr. Kaplitt inserted a gene to allow cells in that area to begin to make a particular chemical called a neurotransmitter. This was designed to re-establish the normal chemical balance that becomes dysfunctional in movement disorders such as Parkinson’s disease. Studies in animals supported this concept, demonstrating both safety and long-term improvement in movements as well as in brain activity.

Dr. Kaplitt’s lab also has extensive collaborations with other leading researchers at Cornell University and around the world, researching ways to use gene therapy to better understand other conditions, including complex pain, sexual dysfunction, and obesity. Dr. Kaplitt is also collaborating on studies examining the effect of deep brain stimulation on brain function in Parkinson's disease and is involved in a multi-center study investigating the potential for deep brain stimulation as a novel intervention for refractory epilepsy. Finally, he and his colleague Mark Souweidane, MD, are assisting Dr. Ronald Crystal in his trial testing gene therapy for Batten disease, an incurable pediatric neurogenetic disorder. Read their blog about that and other clinical trials