Dr. Michael L.J. Apuzzo was recently invited to spend a week as a visiting professor at the University of Toronto, where he presented a variety of seminars and lectures, led a Town Hall meeting with residents and fellows, and delivered the annual Alan and Susan Hudson Lecture. Dr. Alan Hudson is widely credited with having transformed the delivery of health care in Canada; the prominent neurosurgeon spent a decade as president and CEO of the University Health Network in Toronto — a network he created that became an economic model for health care delivery in the country. Dr. Hudson has been awarded the prestigious Order of Canada for his accomplishments, and the lecture that bears his name, now in its fifth year, was established to celebrate his remarkable achievements.

Dr. Apuzzo’s keynote lecture, “When Worlds Collide: Poseidon Meets Cushing,” was a remarkable review linking his experience working on nuclear submarines with the reinvention of neurosurgery and the emergence of  modern neurosurgical technology. Dr. Apuzzo's experience includes time at the California Institute of Technology at the NASA Jet Propulsion Laboratory (where he worked on the miniaturization of technology that allowed the collection of soil samples from Mars) as well as at the NASA facility in Cape Canaveral, Florida. He is considered one of the pioneers of modern neurosurgery and has long been a champion of incorporating advanced new technologies into the neurosurgical arena. 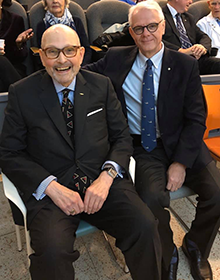 Above: Dr. Apuzzo visits with Dr. James Rutka, the R.S. McLaughlin Chairman of the Department of Surgery at the University of Toronto and the editor of the Journal of Neurosurgery, at the Hudson Lecture 2019

“Alan and Susan have been my dear friends for many decades,” says Dr. Apuzzo, “so it was especially gratifying to take on the visiting professorship and lecture named for them. The professorship was established and funded by action of the Premier of Canada and the Province of Ontario to honor Alan as a celebrated neurosurgeon and remarkable administrator, and I am honored to have filled the role this year.” The Department of Neurosurgery at the University of Toronto is generally considered the premier service in Canada, and one of the best in the world.

As an adjunct professor of neurosurgery at Weill Cornell Medicine, Dr. Apuzzo mentors faculty, residents, fellows, and students and is active in developing the department’s radiosurgery program and overseeing academic publishing. He also serves in an advisory capacity for the development of clinical and laboratory neurosciences. Dr. Apuzzo also holds faculty appointments at Yale University and University of Southern California.