Dr. Philip E. Stieg, the Margaret and Robert J. Hariri Professor of Neurological Surgery and Chairman of Neurological Surgery at Weill Cornell Medicine and Neurosurgeon-in-Chief of NewYork-Presbyterian/Weill Cornell Medical Center, was named by Albany Medical College as the Distinguished Alumnus of the college for 2022. This marked the first time the college honored one its PhD graduates with that award. Dr. Stieg earned his PhD at AMC in 1980 before going on to earn his MD at the Medical College of Wisconsin in 1983.

Albany Medical College is the oldest medical school in the United States, founded in 1839. In his acceptance speech, Dr. Stieg recalled how at home he felt in Albany, with its wealth of natural resources and cultural attractions in addition to its being steeped in American history. Mostly, though, he recalled the intellectual and academic rigor he found at AMC, praising the mentors in who nourished his passion for neuroscience and encouraged him to go on to a life in neurosurgery rather than research, specifically calling out Alan Boulos, Robert Bourke, Harold Kimelberg, Louis Nelson, and John Popp for their influence on his career. 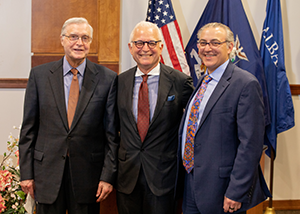 A. John Popp, MD, Professor Emeritus of the Department of Neurosurgery at Albany Medical College, and Alan Boulos, Dean of the Medical College, flank Dr. Philip Stieg at the ceremony that named him Distinguished Alumnus for 2022.

Dr. Stieg credited AMC for helping him shape the philosophy that formed the foundation for his professional life. After earning his MD in Wisconsin, Dr. Stieg completed his neurosurgical residency at UT Southwestern Parkland Memorial in Dallas and a fellowship in neurobiology at the Karolinska Institute in Stockholm. After 11 years at Harvard University and Brigham and Women’s Hospital in Boston, Dr. Stieg was recruited to become the first chairman of neurosurgery at NewYork-Presbyterian/Weill Cornell Medical Center. In the two decades since, Dr. Stieg has built the department into a clinical, research, and academic powerhouse, with more than 30 faculty members across New York City providing world-class care for patients who come from around the globe as well as from surrounding neighborhoods for treatment here. The residency program is nationally ranked for research output, and the clinical department was ranked #1 in the world by Newsweek for 2021-22.

The core principles that Dr. Stieg developed over his time at AMC and beyond now guide the department he has run since 2000:

Dr. Popp and Dean Boulos, who had nominated Dr. Stieg for the award, were both present for the ceremony to see their former protégé honored.