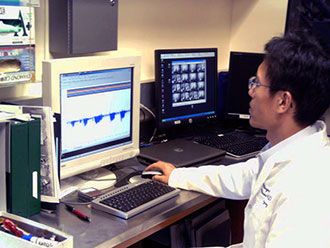 The loss of neuronal inhibition has been demonstrated in a variety of epilepsy models and proposed as a possible mechanism for increased excitability. Interneurons serve as an important regulator in cortical function and play a vital role in epileptogenesis. The idea of treating intractable seizures by grafting inhibitory interneurons is almost two decades ago. A variety of transplantation strategies have been employed to suppress epileptic activity such as the use of immortal cell lines engineered to produce gamma-aminobutyric acid (GABA), and embryonic stem (ES) cell derived adipose tissue engineered to release the potent anti-epileptic adenosine. Interneuron-based cell therapy holds a great promise for epilepsy. Recent works in the Weill Cornell Brain and Spine Center's laboratories demonstrated that transplanted interneuron progenitors differentiated into mature interneurons in adult host mouse brain and reduce acute 4-AP seizure propagation. To move toward this translational goal to clinical application, further work will develop a novel cell therapy for neocortical epilepsy using induced pluripotent stem (iPS) cells from human immature permanent teeth.

The novel approach of iPS cells is based on using four transcription factors to revert the nature of a mature cell to a primitive embryonic stage. These iPS cells could be an important potential source of human interneurons that could be used to cell-based therapy. The generation of iPS cells holds a great promise for regenerative medicine. However, reprogramming human cells have been more difficult. In this study, researchers will use iPS cell-derived neural progenitors to treat focal neocortical epilepsy. The goal is to create a novel treatment with potential to reduce seizures and improve the quality of life for epilepsy patients, as well as decrease the financial cost of epilepsy for both the patients' family and for society as a whole. Secondly, this project will optimize the protocol of generating transplantable neuron precursors from human iPS cells and test its survival, migration, differentiation, and functional integration in the host brain. Such a strategy can provide better understanding on the mechanism of action of stem cells after transplantation. Therefore, the results will help to realize a safe personalized iPS cell-therapy in humans. Thus the project has great potential to lead to novel treatments for patients with epilepsy.