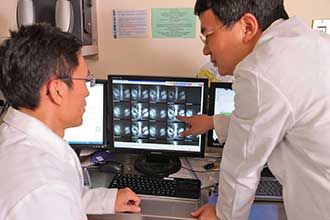 Neurovascular and neurometabolic coupling are critical to supplying the energy demands of brain tissue during both normal function and epilepsy. Epileptic events initiate a large focal increase in metabolism and cerebral blood flow (CBF) to a seizure focus. In contrast, decreases in CBF have been demonstrated surrounding the focus, the etiology of which is unknown; also unknown is the relationship between these events and neuronal activity and metabolism. Intrinsic optical imaging is a technique for measuring hemodynamic changes in the brain based on enhanced light absorption of active neural tissue, which is caused by focal increases in CBF, deoxygenation of hemoglobin (Hbr), and enhanced scattering of light.

Previous studies have shown that intrinsic optical imaging can be used to map the onset and spread of epileptic events through their hemodynamic sequelae with very high spatial and temporal resolution, as well as high spatial sampling. Flavoprotein autofluorescence imaging (AFI) measures changes in the redox state of mitochondrial flavoproteins. In the epilepsy lab, researchers induce seizures in anesthetized rodents by intracortical microinjection of epileptogenic agents and record seizure activity with local field potentials (LFP) and multiple unit activity (MUA) with glass electrode or microelectrode arrays while imaging with OIS, AFI, or multiphoton microscopy. A combination of in vivo two-photon imaging, electrophysiological recoding, laser Doppler flowmetry, oxygen microsensor, neuropharmacology and optical mapping is used. The epilepsy lab's recent study found that AFI could be used in mapping mitochondrial metabolism changes during seizure discharges.