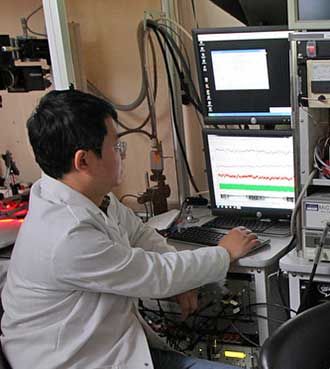 In collaboration with Dr. Chris Schaffer of the Department of Biomedical Engineering in Ithaca, the epilepsy lab researchers are exploring the mechanism of neocortical epilepsy from single-cell level calcium imaging to system level brain mapping. The long-range goal of the collaboration is to find a therapeutic approach to interrupt neocortical focal epilepsy after the origin of seizure has been identified with the greatest possible accuracy.

Focal epilepsy responds poorly to medication. Often, the only hope is surgical resection of the seizure origin. However, this requires a good method of locating the seizure focus. Tools such as fMRI are limited in their usefulness for this problem, but optical intrinsic spectroscopy (OIS) and autofluorescence imaging (AFI), in which endogenous fluoro- and chromophores are imaged at the cortical surface before surgery, provide the unique capacity to visualize the seizure focus. OIS relies on neurovascular coupling in which neuronal activity drives local changes in blood oxygenation, flow and blood vessel diameter. AFI signals follow changes in metabolism caused by neuronal activity. Because these signals are easily imaged, they could be used to map the abnormal neuronal activity in a seizure. However, the mechanisms that relate neuronal activity to these signals are not understood, limiting their effectiveness for seizure localization. Recent work supports the idea that seizure initiation and propagation is caused by an imbalance between the activity of inhibitory and excitatory neurons. In addition, we recently showed that vascular measurements in OIS may be a reporter of the activity of both inhibitory and excitatory neurons. Therefore, measuring the relative strength and timing of the activity in these two types of neurons is crucial.

The goal is to gain a cellular network level understanding of how inhibitory and excitatory neurons interact in seizure initiation and propagation using multiphoton microscopy. Researchers will then see how these neural dynamics translate into vascular constrictions and dilations and OIS signatures with the goal of identifying patterns that can be used to localize seizure foci with unprecedented accuracy. OIS is already used in surgery, so the advances developed here should translate to the clinic rapidly.