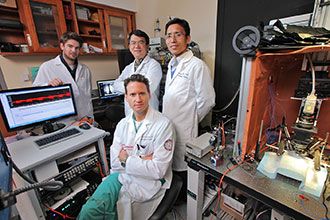 It is still unknown if adult cortical neurons respond individually, or if there are multicellular units of activation that may represent an emergent functional state of the circuit, such as an attractor. Optical imaging of population of cells makes it possible to visualize circuit dynamics, deduce its potential circuit architecture, and explore if canonical microcircuits exist. Lab researchers also interested in understanding how epileptic seizures can recruit apparently normal cortical circuits. The cortical microcircuit is built in modular columns with specific intra- and inter-laminar projections from many neuronal subtypes. Recent evidences from humans indicate that seizures may initiate through the coalescence of microseizures in individual cortical columns.

The role of the cortical microcircuitry in microseizures is unclear but likely to be the key. To explore it, researchers aim to develop a new method using caged photochemical compounds to initiate microseizures with fine temporal and spatial control. The interference of epileptogenesis at such minimal epileptogenic microdomains will be examined on subtypes of neurons by optogenetic approaches. The goal is to investigate the role of microcircuits in epileptogenesis in order to understand and control focal neocortical epilepsy.